After sitting down with Indy Baldwin and Josh Gordon, it’s time to talk to Aaron Gordon Kent. Happily married to Blake, Aaron barely recognizes himself anymore from even a few years ago. He and I had a surprisingly honest and deep conversation about identity.

Aaron, thanks for agreeing to talk to me.

My pleasure. I really loved the way you wrote all our stories. I recently reread No Fear, and you caught all our emotions so well. Though it was hard to read at times, I’ll admit.

What was hard for you?

[sighs] To see how much of a dick I was before. [Laughs] If Blake could hear me say the word ‘dick’, he’d be proud. Cursing and words like that still don’t come natural to me. Even when they’re on the tip of my tongue, I always have to force myself for that last step. It was so ingrained.

But I digress. Yeah, I don’t really like the old Aaron. I think he was a judgmental jerk, and I know I hurt a lot of people with that attitude, Josh most of all.

Blake called you a lost puppy.

[smiles] He did. He saw the good in me even before I saw it myself. He still does. Even now, I still struggle with low self esteem. I was taught to hate myself for so long that it will take time to overcome that.

How were you taught that?

Josh and I grew up in a conservative Christian home. Now, don’t get me wrong: there’s nothing inherently wrong with Christianity or with believing in God. I still do. But I only discovered later that God is love, not hate. I was taught a specific image of God, that of a judging, hateful God who rejected sinners. And being gay, of course, was a major sin, if not the biggest one.

For some reason, a lot of strict churches judge sexual sins far more than other sins, even though I see no evidence in the Bible that Jesus made that difference. But they do, and they’d ten times rather rail against ‘the homosexuals’ than judge the man who’s beating his wife, or the guy who’s drinking way too much, or who’s stealing from his boss. They’ve made sins into a ranking system, and being gay ranks way up there with having sex before you’re married and maybe committing adultery—though they tend to judge women far more harshly for that than men. Hell, if a man commits adultery, they’ll sometimes blame his wife for not satisfying his needs. It’s insane.

But I grew up being taught to hate gay people, and then Josh came out, and I was just… For all these years, we’d been taught that being gay was sinful, an abomination. And Josh still came out. The things our parents said to him… If I think about it now, I get sick to my stomach. no child should ever hear those things, let alone from their parents. He was only fourteen, a child, and they treated him as if he was dirt under their shoes. But…so did I.

[takes a deep breath] It’s hard to understand when you’re not raised that way, but it’s like you’ve been brainwashed. I was programmed to feel how they felt, to judge the way they had taught me, to condemn Josh’s sin. I was twelve and I didn’t think for myself. Of course, knowing what I know now about me being so submissive, it makes more sense, but I didn’t even think about standing up to them, even though deep down it didn’t feel good to treat Josh like that. If he hadn’t met Noah, I don’t know how things would’ve turned out for him. Noah became his brother, his protector.

[giggles] Brothers with benefits? But seriously, in hindsight, I think it’s safe to say that Noah saved him.

You tried to talk to him though, before he enlisted.

I did, but he brushed me off. It hurt deeply at the time, because I’d come to the conclusion that how my parents were treating him was wrong, and I wanted to tell him that. Of course… [his shoulders seep] I’d realized by then that I was gay, too. I was so scared of being alone with him, but I couldn’t get the words out. And Josh was done with me. He told me Noah was now his brother, and it felt like he’d disowned me. He was absolutely right to, don’t get me wrong, because I’d been a total…asshole to him, but it hurt so much. And then he left, enlisting alongside Noah, and I was stuck… 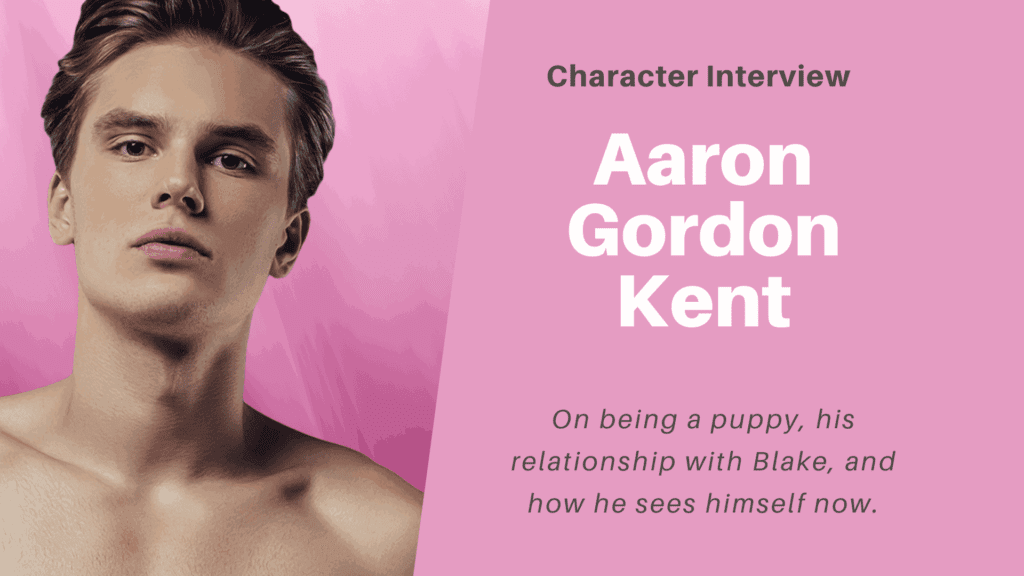 You’ve come a long way since then.

I have, but I still haven’t managed to leave it all in the past. Your childhood years are so formative, that the messages you get in that time really sink in deep. It’s gotten much better, but at times, I still struggle not to judge myself, also because I’m not just gay, I’m gay, submissive, rather feminine, and…a puppy.

How important is being a puppy to you?

It’s who I am. I’ve really come to accept that. I’m deeply, deeply submissive, but not like Josh is. He likes pain, I don’t. I love a mild spanking, but that’s as far as it goes for me. But being a puppy, letting go of everything and allowing Blake to make all the decisions…it’s such freedom. He’s my owner, my master, and I’m more than fine with that. He loves calling the shots, and I deeply relish not having to make the decisions.

You’ve changed a lot over the years, but how about Blake? He had some issues to work through as well, especially with his brothers.

[nods] For sure. He and Brad have done some sessions with Miles and Noah, where they talk about the past and what happened. They both suck at talking, but they’re learning to be more open with each other, and it’s done them a world of good. But Brad has changed anyway. His relationship with Miles and Charlie has been so good for him. Miles is super strict with him, but Brad needs it. He’s a middle, we all think, and Miles is the Daddy he needs, though Noah and Connor step up as well when necessary.

And has Blake talked to Burke?

Burke is…complicated. Him showing up for Christmas was very unexpected, though a welcome surprise. He apologized to me for what he had done to try and keep me and Blake apart, and I’ve forgiven him. He and Blake still have a lot to work through, but Burke has been seeing someone, and that has proven to be a game changer. We were all shocked when we found out, and at the same time, it made total sense. You should ask him sometime, Nora. I think it’s a compelling story of redemption.

They all have their trauma, the Kent men, but I think that’s kind of the theme in our chosen family. Indy, Noah, Josh, Connor, Charlie, Miles… None of us is without baggage, without trauma, and while it’s messy and complicated at times, it’s also beautiful and amazing. And it makes for really hot and sexy books. [giggles adorably] I can’t believe they’re even being translated in German!

But I have to go. I loved talking to you, but it’s been intense as well, so I need some time with my collar on and my Master in charge. Love ya, Nora!