I love stories that feature first time gay, whether the guy has never had sex with a man or never had sex at all. It’s just sweet and endearing to see him/them figure things out. Even more when they do it with a wise mentor, who selflessly sacrifices himself to help them learn. Ahem.

Anyway, that’s one of the key elements in the romance in Click, the third book in my White House Men series. Rhett, the White House photographer, is a virgin, and he decides that he’s done with that. He wants a boyfriend. Enter his boss, chief of staff Calix, who becomes his mentor…and more. How nice of him, right? Because it’s not like he could possibly have another motive…like the fact that, I don’t know, Rhett is super cute and sweet? LOL.

Enjoy this fresh teaser from Click, then preorder now so you can read it as soon as it releases! (This teaser is unedited and since I dictate, you may stumble across some hilarious dictation fails. You’re welcome, haha.) 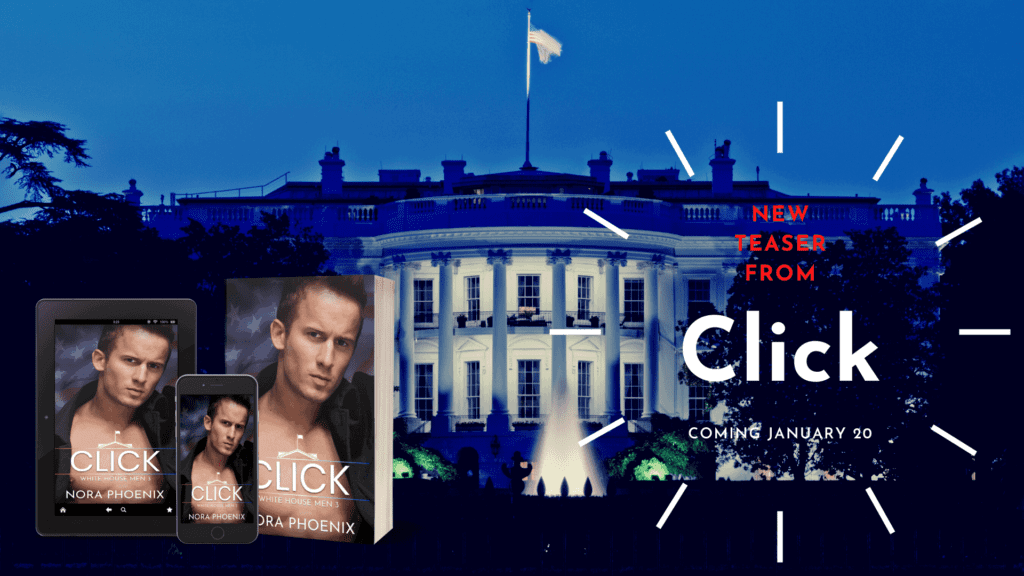 Okay, that was it. Calix had fought hard against the urge to hold Rhett and hug him, but that had to end now. He couldn’t possibly be expected to stay on the couch when the boy said such incredible sad things that made him look like he would burst out in tears at any moment.

“You know you can trust me. Come here, sweetheart.”

Apprehension painted all over his face, Rhett slowly got up from his chair, swaying a little until he found his balance. His body was stiff as he sets down next to Calix. Yeah, none of that. Calix gently tugged Rhett’s wrist, then a little harder to make his intention clear, and finally, the boy gave in.

Calix wrapped his arm around him, pulling Rhett against his chest, then held him close with his other arm as well. “That deserves a hug.”

Shit, he should’ve asked. In his overwhelming needs to offer comfort, he’d forgotten to check for consent. Stupid. “I’m sorry. I should have asked if you wanted to be hugged. I am a toucher, always have been. Very tactile. Matthew always joked that whenever the two of us were home, I needed to touch him somewhere, even if it was just our feet. And now I’m rambling. I didn’t mean to. Just… Is it okay? Is this okay?”

Rhett’s reaction was a deep sigh, and then his body went slack in Calix’s arms. That was a yes, then. “Did you need a hug, sweetheart?”

He winced as his cock hardened all over again, excited by the first physical contact in five years. Should he say something? Chances were that with Rhett being as inexperienced as he was, he might not even pick up on it. No, he would ignore it and hope Rhett would do the same. Things were already complicated enough.

“So,” he said, his voice soft and warm. “I’m starting to see the picture. We need to find you a guy you can safely experiment with. Someone who understands your background and where you’re coming from and who won’t judge.” The more he thought about it, the more he liked that idea. “We need someone patient, someone who understands they’re a necessary step, something you need to gain confidence before moving on. You don’t need to start dating right now or be serious about finding a boyfriend. You need to get laid in the safest, most encouraging environment possible.”

“I didn’t catch that, sweetheart.”

Calix frowned, getting frustrated with himself. Why was he still calling Rhett that? He should really stop.

“Any idea where to find a paragon of male virtue like that? On rentatemporaryboyfriend.com?”

Calix snorted. Apparently, Rhett hadn’t lost his sense of humor yet. “I don’t think we need to sink quite that low. I’m sure that we can find someone in our network who would be willing to…” Hmm, what would be the correct term here? Definitely not date. Fuck was way too harsh and pedestrian. “Mentor you.”

“Mentor me? That’s gotta be the biggest euphemism ever.”

“I know. I’m actually quite proud of that, even more when you consider I’m not exactly sober.”

“Neither am I, or I never would’ve told you all this.”