I was telling someone the other day that the writing part of my job never feels like work to me. Every time I sit behind my keyboard (or microphone in case I’m dictating), I’m excited to get back into the story. That’s even more true when I love a book or series as much as I do the White House Men. As someone who’s always been fascinated by the White House and the people who live and work there, this is such an amazing series to work on. I get to use my love for The West Wing, for Designated Survivor, for The American President, and more and create my own fictional White House… The gayest White House ever, haha.

I’ve also done a crap ton of research (and I’m still reading a lot of books on this topic and related ones, like about the FBI, the Secret Service, counterterrorism, and more…), and it’s all fascinating to me. I can’t use it all in the books, of course, since that would make them more instructional and non fiction than romantic suspense, but every now and then I get to drop little tidbits in that I learned, and I love it.

My White House isn’t factual, obviously. As always in fiction, I had to simplify certain processes and eliminate the extra jobs and characters that exist in real life. Otherwise we’d get a book with way too many characters and too many tedious details. That’s all part of the creative liberties we take as authors (or as artists in general). Let’s face it: bureaucracy isn’t sexy or exciting to read about, haha. But other than that, I’ve tried to make things as accurate as possible. 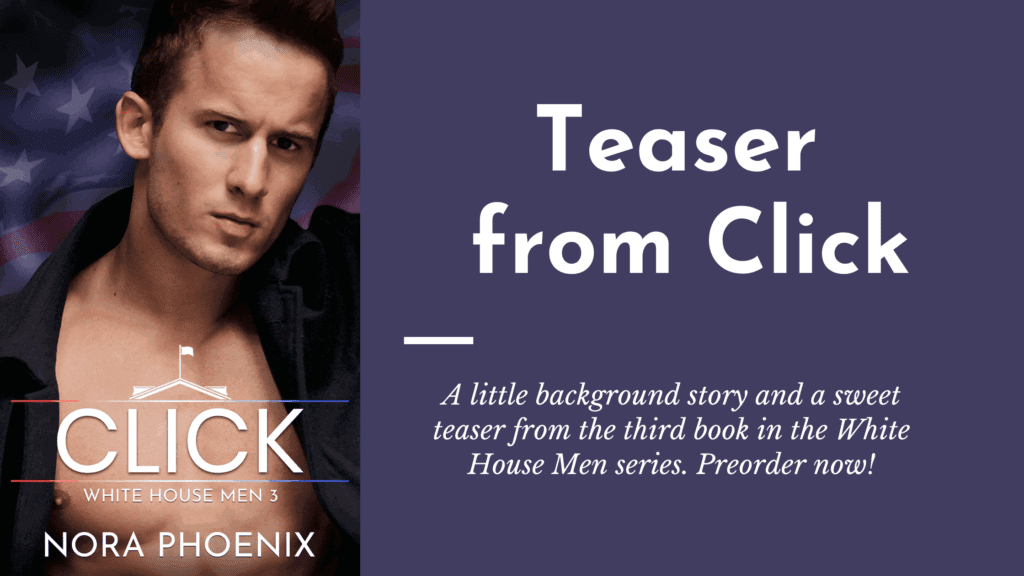 One fascinating job in the West Wing (which is basically the office-wing of the White House), is the chief of staff to the president. I read some books about this, and man, that is a tough job. The chief of staff is basically the manager of everyone who works in the West Wing, and he’s the president’s right hand man. In my White House, that job belongs to Calix Musgrove, who’s also one of President Shafer’s closest friends. Calix lost his husband, Matthew, in the Pride Bombing and it’s safe to say that he drowns himself in work to survive.

On the other hand, we have Rhett Foles, the White House photographer. Rhett has his own trauma from that day, and he’s still struggling to find independence. He leans hard on his best friend, Levar, who is the president’s press secretary. But now that Levar has a boyfriend (Henley, the reporter), Rhett comes to the conclusion he needs to get himself a life. A life that includes a boyfriend…and sex. Because even though he’s 32, Rhett is still a virgin, and it’s something that’s bothering him.

So what happens when Calix befriends Rhett because he feels protective of him? And Rhett is happy with Calix’s friendship because he makes him feel safe? Friendship, that’s what happens. But when Rhett announces he’s dating, searching for a man who will be his first, Calix has a solution… Do you see where this is going? Gah, I’m having so much fun with these two. Rhett is a cinnamon roll of a guy, and Calix may be smart but he’s also fucking clueless, and the combination of those two is just everything…

Anyway, here’s a little snippet from Click (unedited and I dictated, so my apologies if you spot any whoppers of typos, haha…). Rhett has just given Calix a neck massage, since his neck was bothering him:

Calix closed his eyes and brought his left ear as far toward his shoulder as he could, which was at least an inch more than before Rhett’s massage. When he did the same on the right, the most satisfying popping sound came from his neck. “Oh my God,” he groaned. “I swear to God, that feels better than an orgasm.”

He froze as soon as the words had left his mouth. Why did he keep messing up with Rhett? Why did this kid have the unique ability to make him forget his professional attitude and become another Calix, the private Calix that so few people knew anymore.

Calix opened his eyes and very slowly swiveled his chair around until he faced Rhett. “Still, I apologize. I keep saying inappropriate things with you, and I feel bad.”

Rhett cocked his head as he studied him. “Why do you treat me as if I’m some kind of vulnerable, fragile being that will get damaged if you say the wrong thing? I’m not that broken.”

The hurt behind those words was crystal clear, and Calix felt awful. “I’m sorry if that was the message you got. That was not my intention at all, but I can see why it would come across that way.”

How did he explain this in the way that made sense, that was true, yet at the same time didn’t hurt Rhett? The truth was that he did treat him differently than others, that he felt he had to because of the vulnerability that Rhett projected. He didn’t want to hurt him in any way, but may be in his sincere attempts to prevent that, he had caused him pain after all, though in a different way.

“I don’t think you’re fragile. I think you’re incredibly strong and brave, and I wouldn’t dream of suggesting otherwise. But sweetheart…”

He closed his eyes for a moment. There was that word again. At this point, all he could do was hope that he wouldn’t use it in front of others. Apparently, his mind had decided that it was the most fitting word to call Rhett.

He took a deep breath. “You are vulnerable. Fragile, no. But you can’t deny that you will require a little more care than others. And that’s fine,” he added quickly. “It doesn’t make you less. But you can’t ask me to treat you like everybody else, because you are a little different.”

Rhett’s shoulders dropped, a defeated look filling his face. “I know,” he said, shuffling his right foot over the plush carpet. “But I won’t break down if you curse in front of me, you know?”

“And I don’t mind you calling me sweetheart… Or anything else. It’s nice. It makes me feel good inside. So I don’t care if it’s professional or not.”