I’m so excited to announce that Friends, the second book in the White House Men series, will be releasing on October 26. This is a slow burn friends-to-lovers romance that build up slowly but explodes in high heat. I’d never written a friends to lovers romance before, but I had so much fun with his one that it won’t be my last. Seth and Coulson were so damn clueless, haha.

What Friends is About

I’m still tinkering with the blurb (I’m hoping to upload the preorder tomorrow, so keep an eye out for that…), but here’s what I have so far:

Coulson is straight. So why was he checking Seth out?

Seth is an out and proud Secret Service agent. When he’s asked to assist the FBI on the investigation into the presidential assassination, he meets FBI agent Coulson.

Coulson is straight, or so he says. Seth has no reason to doubt that, not even when they become close friends.

Until he finds himself checking Coulson out a little too closely—especially certain over-sized body parts—and Coulson doing the same to him. For someone who’s straight, Coulson shows a lot of interest in Seth’s dating life, his preferences, and his hook ups. Could it be that he’s not so straight after all?

Meanwhile, every discovery they make in the investigation leads to even more questions. Who killed the president and how did they manage to pull it off? And more importantly: are they done killing…or will more attacks follow?

Friends is an intimate friends-to-lovers romance that begins with a slow burn beautiful friendship but ends in high steam and the happiest of endings. It’s the second book in the White House Men series, a romantic suspense gay romance series set in the White House. Think The West Wing but gay and with less politics. Each book has a new love story with a happily ever after, but the suspense plot ends on a cliffhanger and will be continued in the rest of the series, so the series needs to be read in order. Friends has 95k words. Strong TW for detailed description of terrorist attack.

Make sure to read Press first, since this is a continuing series for the suspense plot, though the romance ends with a happily ever after in each book.

I have to say: the friendship between those two men is truly beautiful. Coulson has some baggage from his past, but the way he works through that with Seth’s help is amazing. I had all the feels while writing this, so expect to feel the same when you read it!

Here’s a little visual teaser to help whet your appetite… 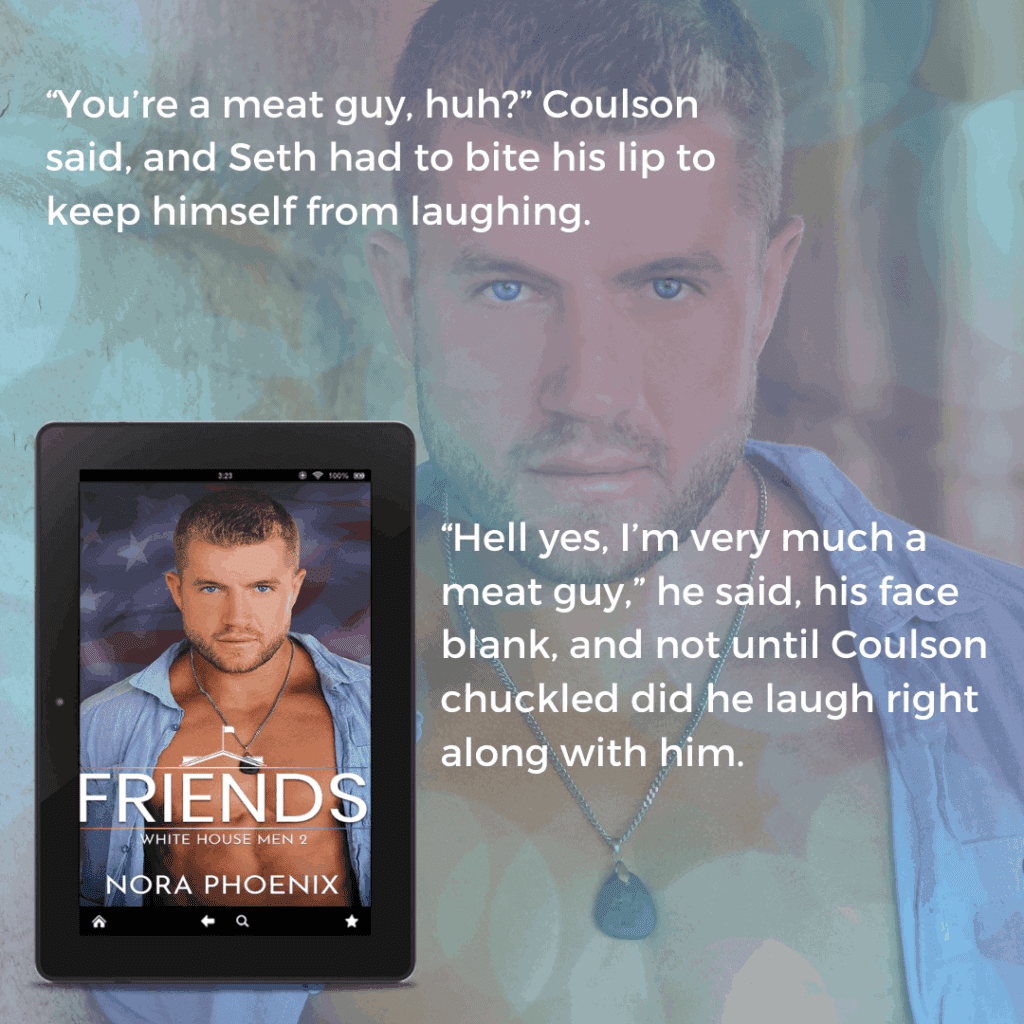 I hope you’re all as excited about this as I am!