Vice President Shafer has been in office for three years now, and in this time, he’s assembled quite the diverse staff around him. Shafer, the first openly bisexual vice president in history, already came from a prestigious political dynasty, his family rivaling the Kennedy’s in fame. But his star rose even higher after the New York Pride Massacre five years ago, the horrific tragedy that cost 153 lives and countless wounded. Shafer heroically coordinated rescue efforts that day, and the enigmatic former senator from Massachusetts has been credited with saving many lives.

Ever since, he’s dedicated his life to public service even more, and for the last three years, he’s served as vice president, where he’s gathered a group of young and diverse staffers around him. Today, we sit down with one of them: Levar Cousins, assistant press secretary to the vice president. 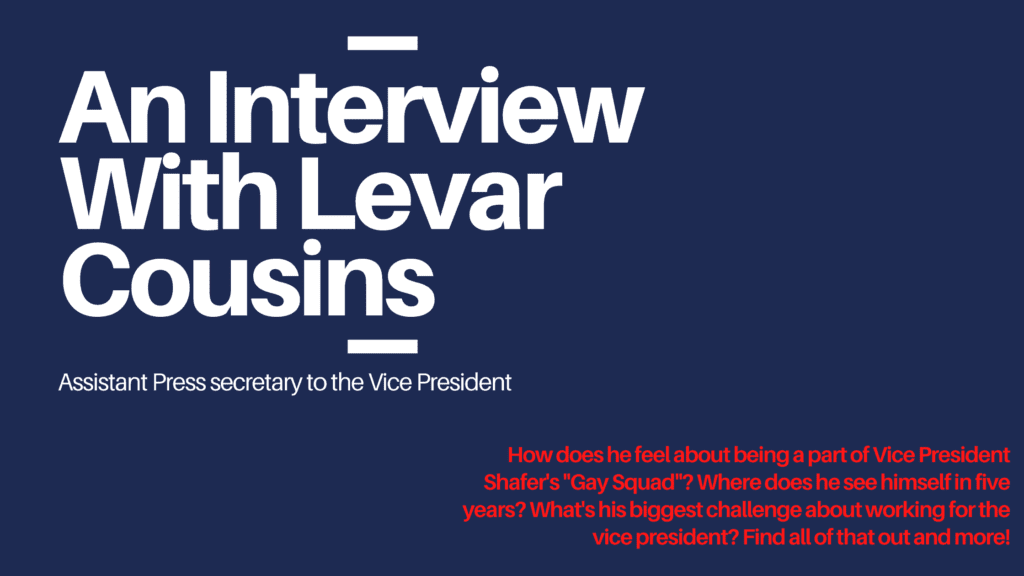 Levar, you’re one of the best known faces of Vice President Shafer’s Gay Squad, as you are called. How does that feel?

(Laughs) That’s a question with many layers, but let me start out by saying how proud and honored I am to be a part of his team. The vice president has assembled the most diverse team in history, representing all races and socioeconomic backgrounds, as well as all colors of the LGBTQ+ rainbow and having neurodiverse and disabled representation. Every time I look around the room, it makes me proud. But to call us the Gay Squad doesn’t do justice to the incredible talent Vice President Shafer has assembled. A label like that reduces people to nothing more than their sexual identity, and that’s only affirming discriminatory opinions.

Why is this so important to you?

It should be important to everyone, especially when it comes to the government. If the government truly wants to represent all people, then it should be a reflection of the diversity of the American people. For too long, only white cis males had a place at the table, and I’m elated to see that change. But especially after the Pride Bombing. That day changed us, both as the LGBTQ+ community and as the American people. To realize that we were targeted specifically because of our sexual orientation… I still fully haven’t come to terms with that.

Vice President Shafer rose to fame because of that day, but so did you. How do you look back on that?

Some days, I feel like I was the right person at the right time. Reporting live right after the first bomb hit was an incredible experience and one that will always be etched into my memory. Other days, I wish I’d stayed home that day. Because I was the first to report, the images are always used whenever someone is reporting on the Pride Bombing, and it’s jarring every time I see myself. It’s like I’m watching someone else, another Levar…and in a way I was. That day irrevocably changed me.

Why did President Markinson choose then-Senator Shafer as his vice president?

I was saddened that former Vice President Hogan had to resign. I know the whole country is praying for him as he continues his battle against cancer. As for your question, I can’t speak for President Markinson, but I think that Vice President Shafer had the qualifications the president was looking for. He’s young yet an experienced senator with broad legislative experience at every level, and I think he brought the combination of energy, vision, and experience the president was looking for.

Critics, even from within the Democratic Party, have stated repeatedly that Senator Shafer, now Vice President Shafer, shouldn’t have made his sexuality part of his campaign. Any thoughts on that?

(Sighs) I know that for a lot of people, it would have made things easier if he hadn’t come out as bisexual. He was already a senator at the time, and married for years to his wife, Sarah. But fact is that even if he’s married to a woman, he’s still bisexual. It’s still part of who he is. Why would he have to hide that? Fact is that bisexuality especially makes a lot of people uncomfortable….or they outright reject it. They feel like you can be either straight, meaning attracted to the opposite gender, or gay, be attracted to your own gender. But the reality is that bisexuality exists, and so does pansexuality and asexuality and demisexuality. Besides, there’s more than one gender, also something that makes people uncomfortable. Then senator Shafer wanted to send a message to everyone out there who’s still scared to be themselves, and I for one appreciated him doing that. I was only twenty-two or so when he came out, but I remember being encouraged by it. He’s blazing a trail for others.

You’re assistant press secretary to the vice president. What does an ordinary day look like for you?

(Laughs) Ordinary days don’t exist in this job. I realize that every morning as I set foot in the Eisenhower Executive Office Building, the EEOB, where the vice president’s office is. This is not an ordinary place to work, and every day is different. But a lot of what I do involves contact with the press, the media. I do press briefings, respond to questions, work hard to get the vice president’s message out…and answer a thousand emails and phone calls a day.

What’s the most fun part of your job?

Walking into the White House whenever I have business there. The feeling of awe never goes away. Even setting foot in the West Wing is still a rush. It’s such a privilege to do this.

(Hesitates) Boundaries. This job makes it hard to make friends because a conflict of interest is almost unavoidable in this town. As big as DC seems, it’s a small town when you have to avoid certain…entanglements. Because I have access to privileged information, there’s a lot I can’t talk about…and not everyone understands that or respects that.

Where do you see yourself in five years?

Oh, that’s a tough one. Well, President Markinson’s second term will end two years from now. I’m hoping Vice President Shafer will get the Democratic nomination and will win the elections. God willing, I’d love to move with him one door down into the West Wing.

You have your eyes on the big podium?

You gotta have ambition, right? One day, yes. One day, I hope to be briefing from the White House Press Room. But for now, I’m proud and honored to work for Vice President Shafer.