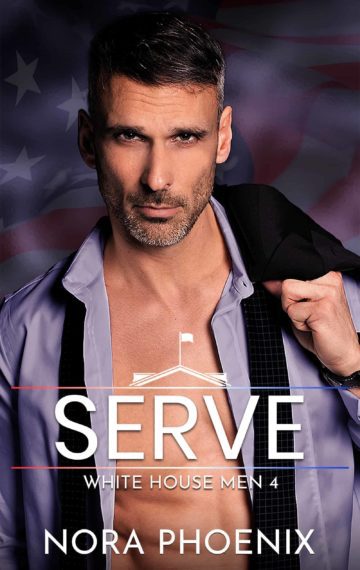 Denali knows what he wants. He loves his job in the Residence of the White House, but what he craves is serving. A Dom. Or in his case: two.

When tragedy strikes once again, Denali offers himself to Milan, the president’s brother in law.  Milan accepts, but he insists Secret Service agent Asher joins them as well. Denali is more than fine with that. Two hot, dominant men is even better than one, right?

One encounter leads to more. Asher warns Denali that he can’t fall for Milan, that the tough, closed off Dom will break his heart. He’s learned that the hard way himself. But Denali knows no other way than to give himself completely, and he’s willing to deal with the consequences.

When Milan and Asher prove to be too stubborn to see the truth, it’s Denali who shows them that love is worth taking a risk for. But will it be enough to bring them together? And how will everyone heal and move on after the most devastating blow yet?

Serve is an MMM gay romance with an age gap, featuring a Dom, a switch, and a super sweet boy. It’s the fourth book in the White House Men series, a continuing MM romantic suspense series set in the White House that needs to be read in order. Serve ends with a happily ever after, but the suspense plot ends on a cliffhanger and will be continued in the rest of the series.