This week, I sat down with Rhys, the main character from Firm Hand, and we talked about Cornell, his passion for his work, life, and more.

Rhys, thanks for your willingness to chat.

No problem. I’m always happy to talk to you.

First of all, how are you and Cornell doing?

[smiles] Really good. It’s been so wonderful to grow closer to him, get to know him even better, and above all, to have the privilege to take care of him in every way. He fulfills me, you know?

Better, but we both know he’ll never be the same again. I think we’re very close to what’s achievable for him. His knee, for example, will always be a weakness. We’re doing daily exercises to strengthen it as much as possible and he’s been diligent about yoga and stretching, but it’ll never be perfect. But we’re both okay with that, I think. I’m well aware of his limitations, and we plan around them. Kneeling is out of the question, to name but one thing. That one hurt him because it was such an essential part of who he was as a submissive, but we’ve found other ways for him to express his submission, and that works for both of us. I don’t need him to kneel for me, and I think he’s at a place now where he no longer sees that as a shortcoming on his side.

A big part of your work has become to work around people’s limitations.

Yes. When I started my own practice, I did it because I wanted to work from home. I needed to be there for Cornell, who wasn’t ready to be on his own, physically or mentally. I started with any patient who wanted me as their physical therapist. But over time, I’ve found my niche. I started working with one of Master Ford’s subs, a guy names Sean, a veteran with an amputation, and he made such great progress in his mobility, that he told others about me. Through word-to-mouth I ended up with a lot of patients with disabilities, for example in the form of amputations, but also patients who had ended up in in a wheelchair after an accident or those with various diseases that limit their physical abilities. It’s been an absolute privilege and honor to help each of them find more mobility and strength and discover what they still are capable of. By now, my practice is almost only patients like that.

Cornell stopped working. How does he fill his days?

He needed that break from work. I think he was close to a burn out even before the accident and with his recovery, it became too much. But once his recovery had made good progress, he did start to get bored, so now he helps me with the administrative side of my practice. I’ve been lucky enough to find a man who is exceptionally good at details and who loves dong this kind of thing, so it’s a win-win for both of us. He’s actually started taking accounting classes so he can do the financial part as well, god bless him.

He is. He’s flourishing. I think we both found our ‘thing’, for lack of a better word. He needed a Daddy, and I needed a boy, and we’re just… We complement each other. It still makes my heart so full every time I look at him, knowing that he’s mine. My boy. 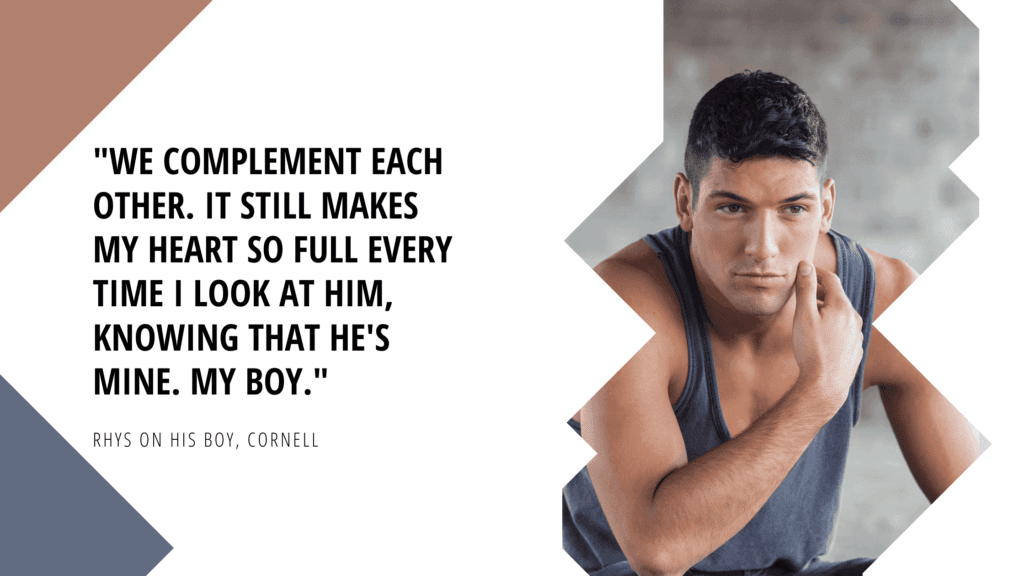 How do others look at your relationship?

[laughs] That depends on who these others are. Raf, of course, is over the moon. He’s known about my then-crush on Cornell for years, so he’s just happy. But because he’s a baby boy himself, he understands and fully embraces the dynamic Cornell and I have.

Maybe also because you’ve been a Daddy to him until he met Brendan.

Yeah, even though neither of us fully realized it at the time. All I knew was that I loved him and that I wanted to take care of him, make sure he was okay. Not until he met Brendan, did it click for me that that was exactly what he needed. And he and Brendan are… God, you can just feel the love when those two are in the room. It’s the most pure, amazing love ever. I love that he’s found the safety and acceptance that he missed out on for so many years.

And other than them? Your mother, for example?

[sighs] Yeah, she’s… It’s hard for her. She’s not as antagonistic as she was, but she’s not fully accepted it either. The age difference bothers her, but even more the fact that he was my dad’s best friend. She can’t see that we’re perfect together. But at the end of the day, that’s on her. I think there’s also some unprocessed emotions there about the divorce with my father and him dying. But again, that’s her responsibility. But in all honesty, she’s the only one who has an issue. Master Ford is, of course, fully accepting, but that’s to be expected from a man who has two boys himself. And god, Jathan keeps him on his toes. He’s like a teenager, that one, but they’re doing so, so much better than when he first got them. I love watching them together.

I am. I just wish… I miss my dad. That’s still a constant empty hole in my heart, and it’s the same for Cornell. I wish my dad could see us together.

Would he have approved?

Yeah, he would have. I think it would have been a bit of a shock for him, for sure, but he was the most open minded person I’ve ever met, maybe after Master Ford. If he’d seen the love between his best friend and his son, he would’ve cheered us on every step of the way… And I think he is. I’ve never been someone who’s super interested in spirituality, but losing my father has made me see things differently. Every now and then, I feel him so close to me, as if he’s in the room with me, with us. The other day, I was doing a scene with Cornell in the dungeon, just a mild flogging, and I kept looking over my shoulder because I felt my father’s presence in the room. In the end, I accepted it for what it was, and it made me happy. I’d like to think that my dad pops in every now and then to check in on us, and that he sees how incredibly happy we are together…and that he’s happy too.