You are here: Home / All Posts / ReaderLinks: Series Sell-Thru and Read-Thru Explained

Welcome to our third post in the series on ReaderLinks. In the first post I showed you how to set up ReaderLinks, and in the second post we witnessed the wonder of CoreLinks. In this post, we’re gonna see how powerful ReaderLinks analysis tools are, and we’ll start with series sell thru and read thru. If you only have stand alones, you can skip this post, but if you have a lot of series, like I do, you may discover some fascinating stuff. Okay, let’s get started.

First of all, make sure all your books have all the info filled out, including the KENPC, the sales price, and the series info. Otherwise this won’t work. If you’re sure it’s all set up well, go to Reports and then choose the first option in the drop-down menu, Series Sell-thru/Read-thru. You’ll see a screen like this. It’s not showing anything, because you have to select a series first.

Let me show you what it looks like when you select a series, and I’ll take my Ignite series as an example because I can show you something interesting with that one. 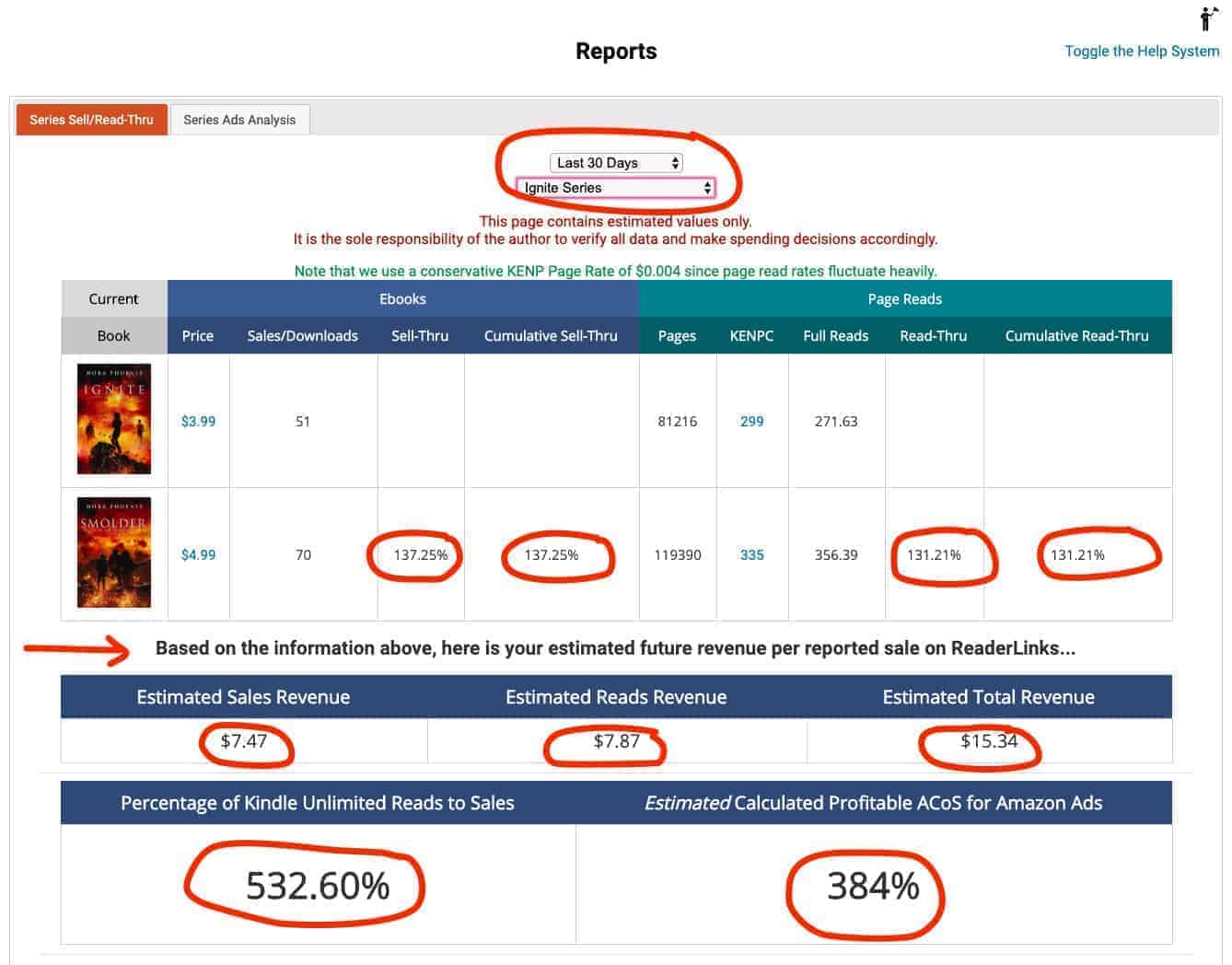 Okay, lots to see here, so let’s have a look. First of all, pay attention to the selected time period because as I’ll show later, this makes a big difference. We’re now looking at the last thirty days, and you can see my sales numbers and KU reads there. If you’re not clear on what sell-thru and read-thru mean, here are the explanations:

Because ReaderLinks has now calculated those percentages, it can give me an estimate of how much I will approximately make with each SALE. Because my KU reads are over five times as high as my sales, I can expect that for every sale of book 1 I make, five people will download the book and read it. Based on these numbers (and I’ll show you below why these are off), readerlinks estimates that every sale will actually make me $15.34 if you add in KU reads and the expected revenue from book 2. Because of that, it tells me that I can run ads on Amazon at 384% ACoS (average cost of sale) and still make a profit.

Here’s why those numbers are wrong…and this is not ReaderLinks fault. The first book in this series released in October 2018. The second book released in January 2020. Because this only looks at the last thirty days, the numbers for both are off, but especially the numbers for book 1. Watch what happens when I change that period to “all data collected”. 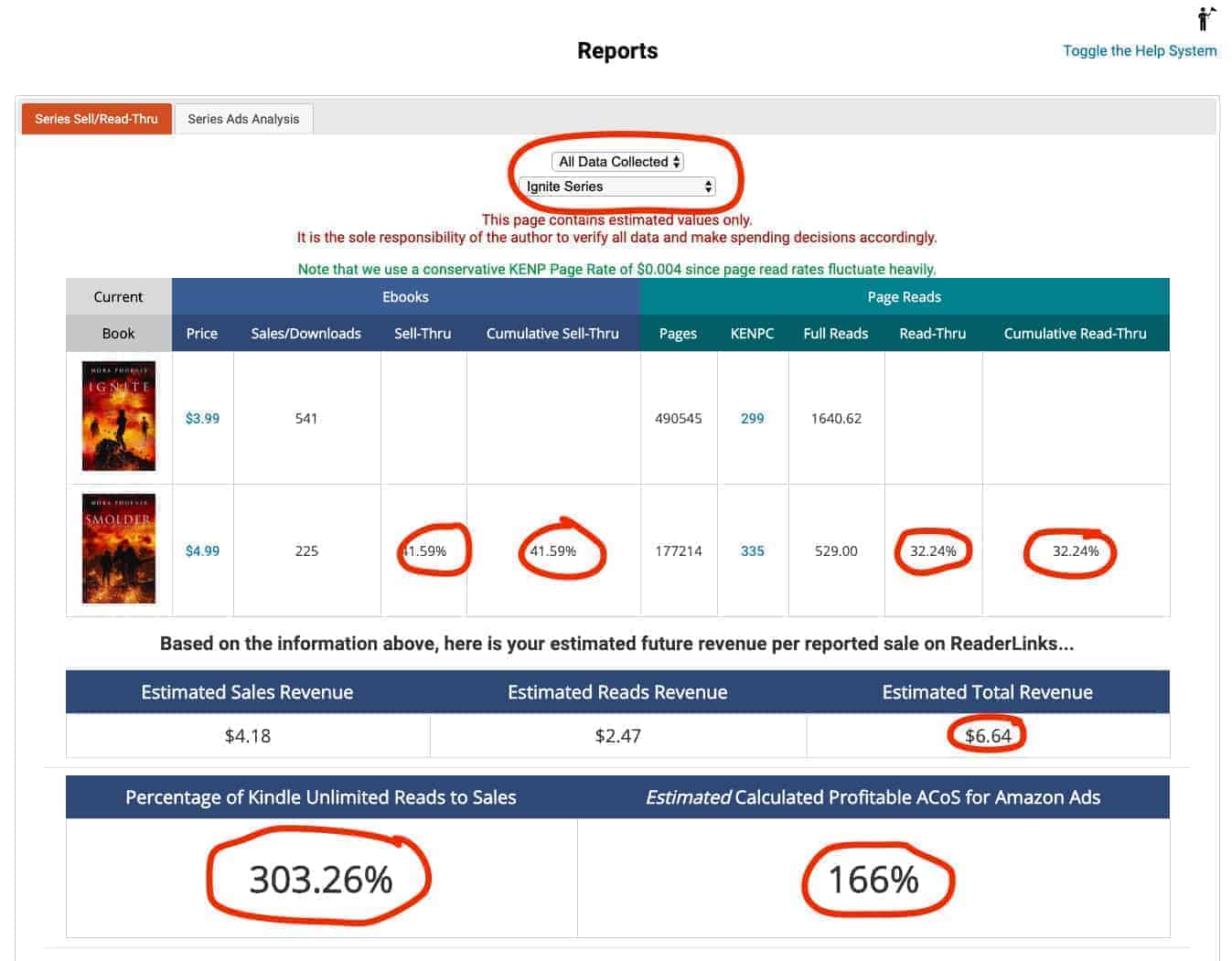 I now have a sell-thru of about 42% and a read-thru of 32%. Big difference, right? It means that a lot of people who have bought or read the first book haven’t yet read the sequel. That makes total sense because the second book only just released. That means these numbers are off as well, and they will be for a while. While these stats give you an idea of how your read-thru is, they won’t be accurate until your series is finished and has been out for a bit. In this case, book 3 will release at the end of this month, which will boost sales of the two previous books, but will also screw with all these read-thru and sell-thru percentages. So for the next few months, these don’t tell me all that much. But in the long term, they’re gold.

Let me show you wit another example, and this, time, I will block out the actual sales and read numbers, sorry.

Here’s what the numbers look like, and I picked that one, because there’s something interesting here as well. Three things, actually. Keep in mind these are all-time numbers. 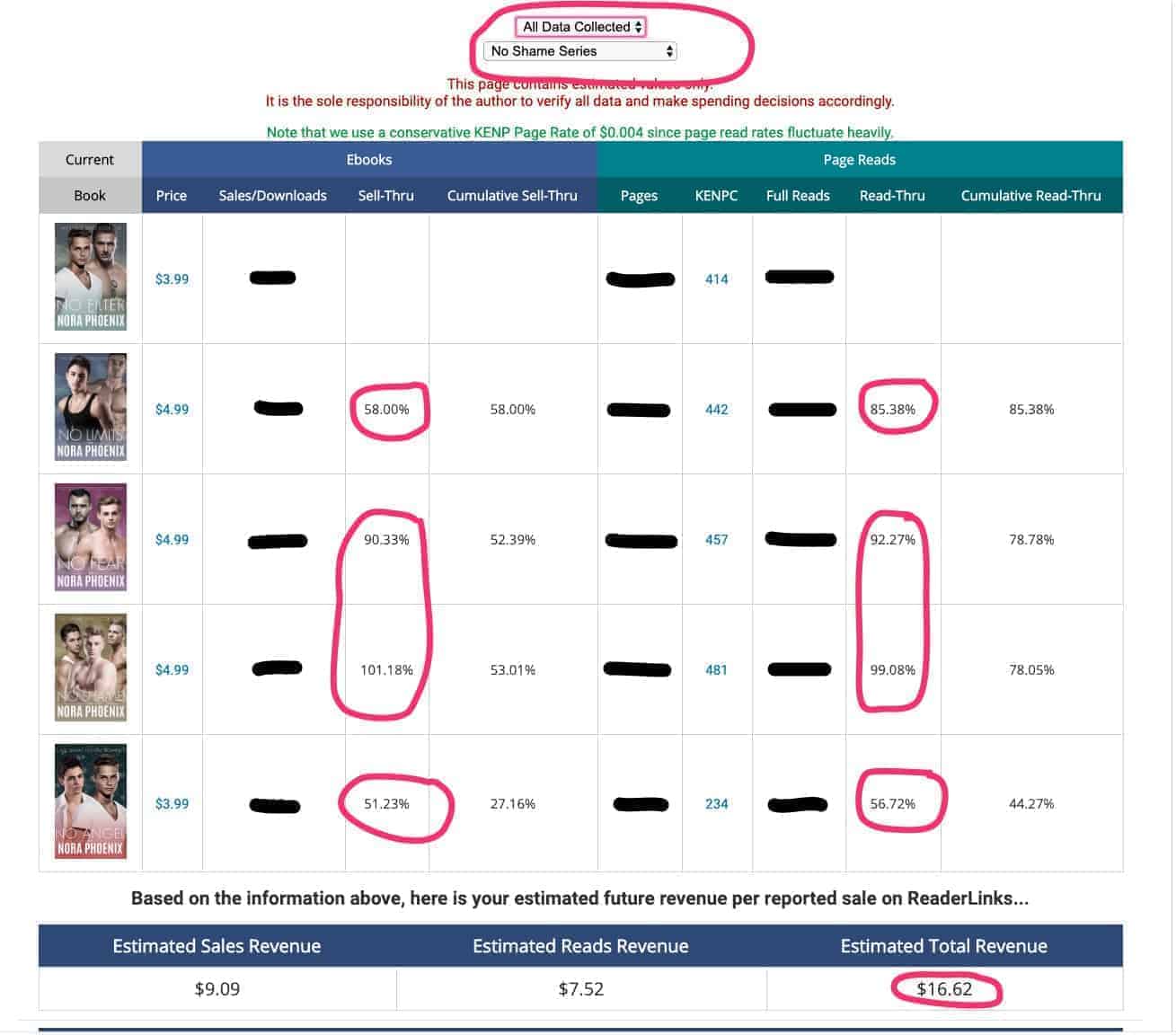 This is a whole ‘nother picture, right? Because this series has five books, you can see the cumulative read-thru and sell-thru are now different from the normal read-thru and sell-thru, starting at book three. Now, here’s what’s off. Why is the read-through from book 1 to 2 only 58%? That’s because book 1, No Filter, has been free for a promotion and got a shit ton of downloads. That throws off these numbers because statistics show that people not always read free downloads. So a lot of readers who have bought that book probably never read it. Also, this is not your average series. Since it’s a bit out of the box, not everyone will like it, which is fine.

Once they buy or read book 2, I’ve got them hooked. That’s a near 100% read-thru and sell-thru so that’s pretty epic. But then we go from book four to five, and we have another huge drop. What happened? Well, book five was an afterthought. It came out almost a year after book four, and it was a Christmas novella. So a lot of readers either didn’t see it or didn’t feel they had to read it.

One more thing about these numbers and why these, too, are off. I also have a boxset that has all books in it plus bonus materials. A lot of readers start with book 1 to see if they like it, and then see there’s a box set and switch to that. That lowers my read-through on this series, but in reality, I still get the sales and the reads, just on he boxset and not on the individual books.

These are all things to keep in mind when you look at your numbers. If you’ve run promotions at lower price for any f them, it will throw off your number. If you have bonus books in the middle, those will fuck up your stats as well. So see it as an indication. The indication for this series is that my read-thru is pretty spectacular…and that makes me very happy, as you will understand.

Okay, that’s another cool feature of ReaderLinks explained. Now, if you’ve looked at this page for yourself, you may have noticed a little calculator at the bottom where you can calculate your estimated profitable bid for Amazon ads. We’ll have a look at that later because we’re not there yet, haha. There’s more to explore!

If you have any questions, drop me a comment below!