You are here: Home / All Posts / How Effective are Social Media for Promoting Your Book?

I’m so happy to finally get back to the Writer Wednesday posts! This week, I want to talk about social media for authors and how effective social media are for promoting your book. Do posts on platforms like Facebook, Twitter, Instagram, etc. really work or is it all wasted time and effort? Let’s find out.

First of all, let’s start with some numbers. My numbers, to be precise. I’m using a service called ReaderLinks and if you’re not using it yet, you’re missing out. It’s a website and service that offers you sales information on your books, provided you link it with your KDP account (much like Bookreport does), but it has much more. One of the most useful tools is the fact that you can make special links for your books for pretty much anything…and then track how often they’re clicked.

If that sounds a little abstract, let me make it more concrete. For each of my books, I use separate links for, amongst others:

You’re getting the idea, right? That means that I can see EXACTLY what’s working…and what’s not. So let’s look at some of my data and see if we can answer the question how effective social media are.

This is a screenshot from my link data for the last 90 days. I’ve marked every social media link with a little red mark. Do you see those numbers? Facebook promo means me posting something on Facebook, either in my own group, on my page, or on my timeline. facebook is by far my most effective medium at least in terms of clicks. “FB Contests” are the links i use when I do takeovers in someone else’s groups. See how effective those are for me? And Twitter, where everyone says it’s not selling any books, had 39 clicks for me on a single tweet. And Instagram is catching up as well. And all of these are free! Well, not entirely free because they still cost time…and that can be a precious commodity as well.

So yes, social media are still effective. But…only when used right. More about that later. 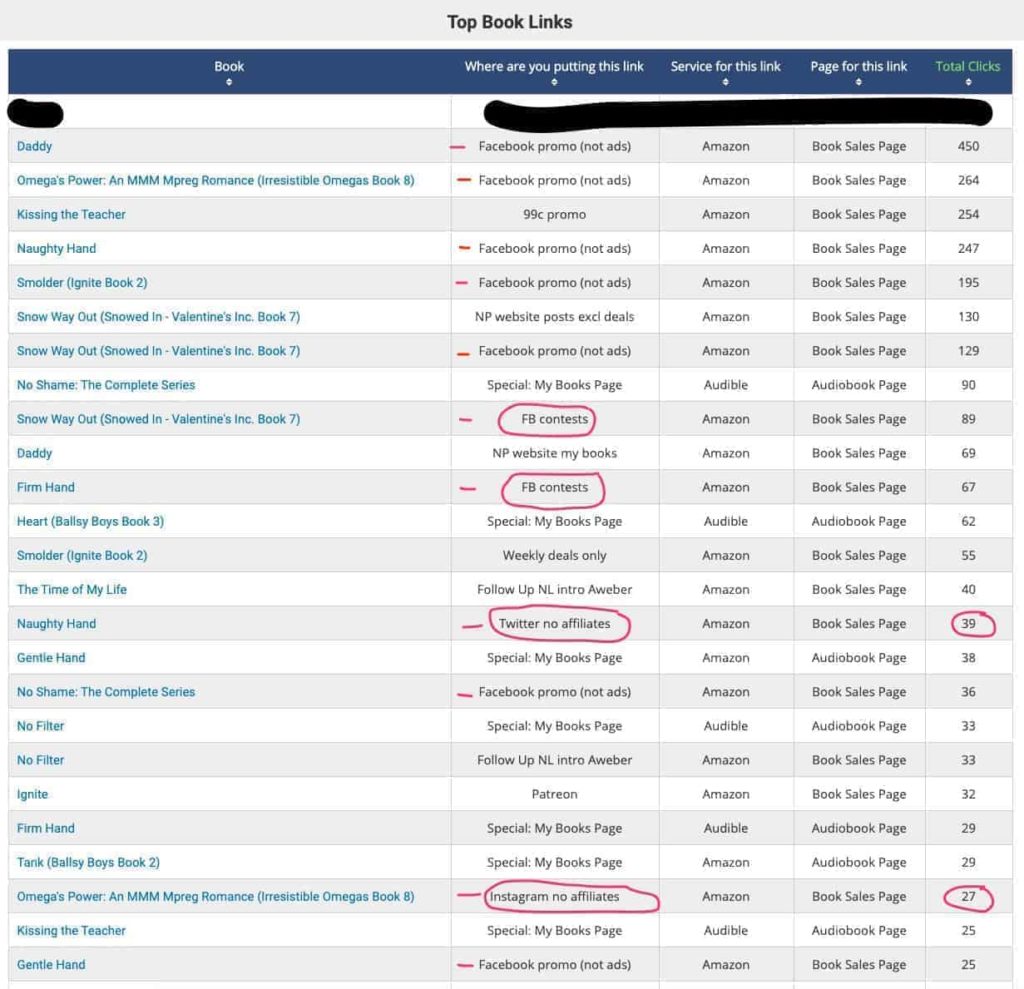 First, I want to show you something else that’s interesting. The numbers above were my 90 last days, as I said. But because it was so much work, I hadn’t switched out all the backmatter in my books yet with Readerlinks links. I did that in December, and watch what happened… This is a screenshot of my last 30 days. 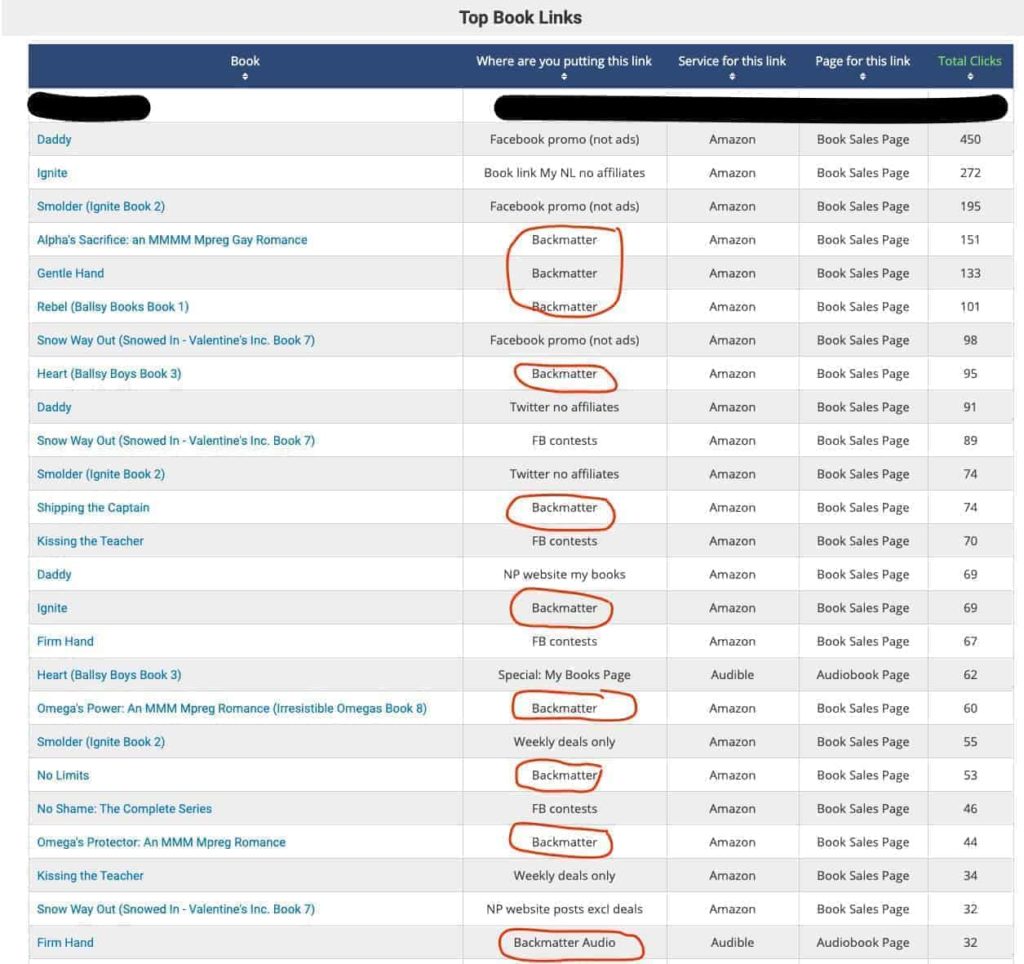 See what popped up all of a sudden? Backmatter links. And they’re super, super effective, even more because they requite no effort from you whatsoever except keeping them updated. (by the way: the reason they don’t show up on the 90 day report is because they didn’t exist for that whole period; I didn’t create them until a month ago…)

Not all social media is created equal and not all posts work well. For MM romance, Facebook is still very effective because it’s where a lot of our readers hang out. The same is true for Twitter, but it’s a completely different type of social medium that requires a different approach. And Instagram is yet another story…

Yet the key approach to each social medium is the same: always keep in mind that it’s a social medium. It’s geared toward interaction, engagement, connections…so engage. Connect. Reply, retweet, like, comment. Be social. For every promo post, do at least nine non-promo posts. Or promote someone else.

Dump and run posts never work, at least not in the long run. If all you do on Twitter is post when you have a new book out, chances are it’s not gonna get much engagement. Twitter, much like Facebook, is moving toward engagement-driven timelines rather than chronological. You’re more likely to see the tweets from people you’ve interacted with in the past. Or Twitter will show you tweets that are popular with others. LikeI said, much like Facebook.

Never forget what Facebook (or Twitter or Instagram) wants: engagement. They’re not “fair” in that sense, and they never will be. They will show the content that’s most likely to get engagement, and they base that on previous behavior from you and your friends/followers. If you never interact with anyone and merely posts, your posts won’t get much engagement either, unless you’re a super big name. And once a post gets traction, they will show it to more and more people and then you go viral. Hopefully.

I had that happen to a random tweet of mine the other day, and it was a fun experience… It got liked almost 3000 times and got retweeted over 500 times! Too bad it wasn’t a link to one of my books, haha. 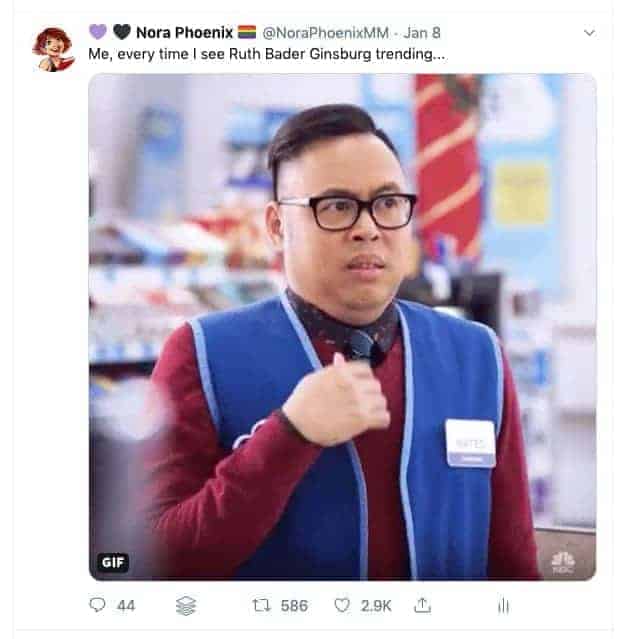 Something else social media value is whether a post is recent. So if you only posts once a week, it’s not gonna get much action. However, if you post every day, Facebook sees that as fresh content and will push it. That’s true for groups, pages, and your personal profile, by the way.

So yes, my FB posts and tweets get traction, but that’s because I’m super active, I post multiple times a day, and I mix promotional content with a lot of stuff I know readers love (or that I love myself). In fact, you’ll find that I post relatively little promotional things in my group…but when I do, those posts get seen too because of all the other content that got engagement. Those twitter stats above are based on one or maybe two tweets per book. I’m actually bad at promoting myself on Twitter relatively speaking, as I share way more other content than stuff about my books… Hmm, maybe I should work on that because those tweets are actually effective, haha.

In short: yes, social media works to promote your book. But it will probably work better if you don’t focus on that “promoting” part but on being social. It’s more work, yes, and it will take more time. But it’s also far more effective…